During the 2019-2020 school year, Texas A&M School of Law offered a year-long capstone course for second and third-year law students to research the legal and regulatory framework surrounding desalination and wastewater recycling plants, and their future role in expanding access to freshwater for urban communities. Part one of the course took place in the fall of 2019 and had the students analyze five currently operating desalination and wastewater recycling regimes in the U.S., Israel, and Australia. Each plant location was developed as a case study through which the students unpacked the various legal and regulatory barriers to implementing such facilities. The research encompassed exploration of permits, compliance, monitoring and other criteria regarding siting and operating these facilities, sourcing the input water, managing discharges, and other topics.

The fall 2019 component of the course was a special offering made possible through funding under a Texas A&M University X-Grant program. X-Grant projects are intended to promote interdisciplinary study on a system-wide level. They are part of the 10-year $100 million Excellence Fund initiated by Michael Young, President of Texas A&M University. Professor Gabriel Eckstein, who developed the capstone course, is part of a team of researchers representing four university units who were awarded an X-Grant for a project on “Pathways to Sustainable Urban Water Security: Desalination and Water Reuse in the 21st Century.”

The X-Grant-funded fall capstone allowed the law students to not only learn and enhance research skills but also contribute to the larger project. Co-author of the project and recent graduate, Alexandra Lizano, commented, “My favorite part of the process was that I felt like I was really contributing to the availability of academia on the subject of emerging water technology in Texas. Hopefully, the project that we completed will give future researchers a better foundation at the beginning of their work to continue where we left off.” The students also were able to attend meetings of the project’s advisory board in San Antonio, TX, as well as to tour that city’s desalination and wastewater recycling facilities.

Researchers in other units across the university include professors and graduate students in the departments of Engineering and Geosciences and the Bush School of Government. Their contributions focus on technological, economic, financing, and policy angles of the larger project to enhance freshwater resource access.

The second part of the capstone course was offered in the spring of 2020. While the fall course laid the groundwork via individual case studies of existing facilities, the spring semester required the students to delve into Texas’s legal and regulatory regime for setting up a new desalination plant and, separately, a wastewater recycling facility in the state. The project was developed for the Texas Water Foundation, which requested the research.

As part of their analysis, the students conducted in-depth research into federal, state, and local requirements for everything related to the siting, construction, operation, and management of these facilities, as well as identified all of the permits, monitoring, and compliance points by which a developer and operator would have to abide. According to Lizano, the projects required the students to explore an area with little to no published information; they had to adapt and converse and learn from engineers and specialists; and then translate and apply the information to legal and regulatory research. Rising 3L and co-author, Courtney Gately said, “[the project] was an intellectually stimulating and challenging project, but Professor Eckstein really allowed us to take charge of it.” 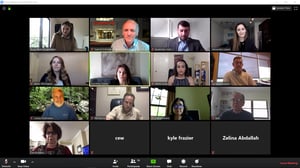 For their work product, the students produced a three-part report: a Desalination Technical Report, a Water Recycling Technical Report, and a report with two Texas case studies analyzing the San Antonio and El Paso plants. The reports have been widely circulated in Texas and are now available as reference material for water professionals in the state.

As part of the capstone course, the students also had to present their findings and work-product to the Texas Water Foundation’s Board of Directors. Due to COVID-19 and state-wide pandemic restrictions, the presentation was held via Zoom. When asked what it was like presenting to academic leaders and industry experts, Gately laughed and said, "I was so nervous. Since they are experts, they really know their stuff, and I was intimidated, but it was a really great experience. And their feedback was fantastic."

The students who participated in the year-long capstone spoke highly of the skills they learned and their involvement in the project. Lizano, said, “This project helped me hone my research skills with respect to administrative agencies and working with non-lawyers.” Lizano noted that, while law students gain experience reading case law or scholarly publications through legal databases like Westlaw and Lexis, this project called for a completely different approach. "I learned how to navigate administrative agency websites, reports, and regulations. The research skills I developed will be helpful in any kind of environmental practice.” Recent graduate, Alexis Long, highlighted that she learned so much from the experience and that the project’s demands were continually changing. Long stated, "the fluidity of the course is very realistic and was very beneficial."

In addition to Gately, Lizano, and Long, recent graduates Seth Boettcher and Alexis Yelvington also participated in the course.