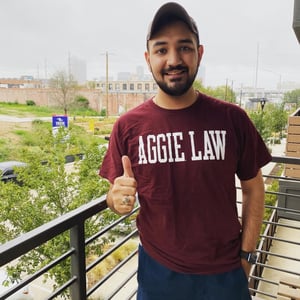 Jaime Villarreal is a 3L at Texas A&M University School of Law. Before law school, he graduated from the University of Texas, Austin, then spent five years working for the Texas House of Representatives under Representative Eddie Lucio III. Jaime spent a large portion of that time working with the House Natural Resources committee focusing on water rights, groundwater permitting, and access to public utilities. He also received a lot of exposure to state water resource issues as well as public policy. In law school, Jaime has continued to focus primarily on those areas, which has driven his choice of internships.

Since EPA Region 6 does a lot of work with hazardous waste generators, such as paper mills that produce large amounts of hazardous materials, much of Jaime’s work involved the Resource Conservation and Recovery Act (RCRA).  However, he also worked on issues related to the regulation of concentrated animal feeding operations (CAFOs) permitting and agricultural exemptions. Moreover, because Region 6 encompasses Oklahoma, he gained some experience with environmental regulation enforcement on tribal lands, which he said he especially enjoyed because tribal lands have their own environmental schemes that are different from those applied by the federal government.

Despite the challenges with the COVID outbreak, Jaime explained that he was still able to have a complete internship experience. While at the EPA, Jaime observed meetings with utilities and individuals subject to EPA regulation. In these meetings, during which the EPA compliance department would meet with regulated parties to explain their mistakes made by these groups regarding their compliance failures to comply with federal regulations like the Clean Water Act.

Jaime explained that he very much appreciated his time at the EPA despite not being able to go into the office. He said that “the class that was most helpful to my work was Agricultural Law with Professor Bradbury, especially when it came to the regulation of CAFOs.” Now that he’s back in school, Jaime has taken International Environmental Law, where he sees a lot of overlap between other countries' environmental schemes and our own. He explained that other countries are “so influenced by regulatory systems” that EPA has established an international law office. Looking forward, Jaime hopes to continue working in the water law field. Long term, his interest lies in resuming state work, whether through the Texas Commission on Environmental Quality, the Texas Water Development Board, or with a state representative. This time, he looks forward to bringing his law school approach to the natural resources field.