Professor Gabriel Eckstein of Texas A&M University School of Law, along with Professor Amy Hardberger, formerly of Saint Mary’s University Law School and now with Texas Tech University School of Law, and several student researchers have published Volume I of Groundwater Laws and Regulations: A Preliminary Survey of Thirteen U.S. States (2nd Ed). A preliminary version of this report was released in 2017 to generate feedback about the methodology, accuracy of information, organization, and usefulness of the project and its findings. Using comments and feedback from that report, the group finalized the first volume of state surveys of the groundwater laws and regulations in thirteen states across the United States. Using a matrix created by the professors, student researchers respond to a standardized set of questions about groundwater regulations, statutes, case law, and policies of each state. The goal of this first volume was to have at least twenty-five percent of the states categorized and recognized. The report includes surveys for: Alabama, Arkansas, Colorado, Florida, Illinois, Indiana, Louisiana, Missouri, Mississippi, Oregon, Tennessee, Texas, and Washington. 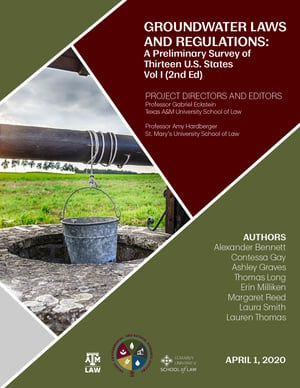 The project objective is to develop in-depth details on the groundwater regulatory regimes in each state in order to develop substantial comparisons of groundwater governance principles, strategies, issues, and challenges across the United States. Once the individual surveys are finalized, comparative research into the different regimes will be started. Collectively, the surveys and analyses should aid states as well as the federal government in exploring new mechanisms and approaches for the sound management of groundwater resources. This survey will also serve as a useful resource for property owners, water rights holders, water managers, engineering companies, the private sector, and the public.

3L Laura Smith, one of the co-managers of the project, asserted that the students scrutinize statutes and case law to determine specific groundwater rights, limitations on use, how regulations may change with the addition of hydraulic connection, and more. “The most interesting part of our research,” Smith explained, “is getting to learn how the different states handle groundwater because, throughout the U.S., the states can vary greatly. In particular, it is extremely interesting to see how states handle conflicts with one another when state boundaries intersect groundwater formations since it is such an important resource to both sides.”

The project implemented a rigorous review process to ensure, to the extent possible the accuracy of the collected information. Once a student completed the questionnaire, a second law student reviewed the work and offered recommendations. The original student then revised the survey in response to those comments. The second student also checked the survey responses for clarity, accuracy, and assisted with research if any portions of the survey eluded the first student. As some student researchers graduated, new student researchers familiarized themselves with completed summaries before initiating additional states. The process resulted in each survey read, edited, and refined by at least three students before finalization.

Once a state survey was completed, Professors Eckstein and Hardberger reviewed the summary and offered additional comments and suggestions, whereupon the original student revised the survey in response. Once a final revised survey was submitted, Professors Eckstein and Hardberger reviewed it once more, and then sent it out for a third-level review by one or more in-state water law experts.

Thereafter, once all internal and external comments were incorporated and a final draft approved by Professors Eckstein and Hardberger, student researchers reformulated survey findings into a more readable essay form and added brief, descriptive headings.

All students who participated in the groundwater survey project, either currently or recently graduated, will receive full authorship credit for each published volume in which surveys they worked on appear. 3L Maggie Reed, who co-manages the project with Smith, commented that: “Working with Professor Eckstein on the groundwater project has been a fantastic opportunity to learn and develop the skills necessary to be a successful lawyer. Under Professor Eckstein's instruction, I have had the ability to build my understanding of water rights in numerous states. And working on a nationwide, state-by-state survey of groundwater laws and regulations has given me a deeper appreciation for natural resource management across the country. I could not be more proud of the product that we have published, and I am looking forward to finishing our second volume this year!” The second volume of the groundwater survey will consist of fifteen states and is expected to be released by the end of 2020. Work on the remaining states has already begun. The surveys are published at: www.law.tamu.edu/usgroundwaterlaws.